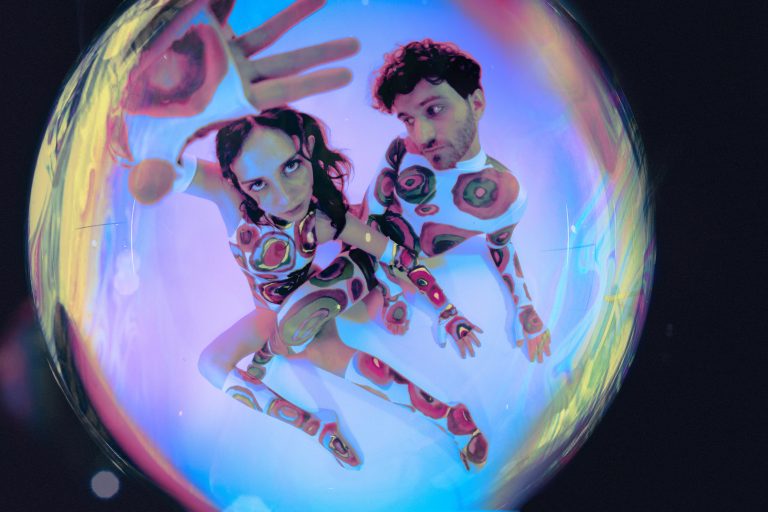 Few artists are at once artful and savvy enough to transcend the endless scroll, but over the past 18 months, LA-based indie-pop duo Magdalena Bay have used social platforms to dispatch their music, and what you might call their philosophy, in hypnotic, ephemeral bursts. A long trip through their feeds produces music videos in miniature, irreverent pontifications on the state of the music industry delivered via home video VHS aesthetics, and existential meditations on everything from International Women’s Day to the clone craze of the early aughts to the indefinite lifespan of plants.

On October 8th, Magdalena Bay will release their debut full-length LP, Mercurial World, via Luminelle, a record that proposes an abstract theory of time and explores the staggering “what ifs” that make up the human experience. “Mercurial World has a lot of outsized themes on it, like destiny, death, and doing the impossible,” Tenenbaum explains. “It’s not exactly a concept album, but we love prog-rock, so we love a concept.”

Tenenbaum and Lewin met over a decade ago at an after-school music program in their hometown of Miami, where they bonded over a shared love of Genesis and King Crimson, eventually starting a prog-rock band together that lasted until they moved away to college. The two reconnected after freshman year and decided to continue their teen rock project, this time in a radically new form that would come to be Magdalena Bay. “We started discovering all of this experimental pop music that pushed the boundaries of what ‘pop’ really means,” Lewin says.

Bleeding-edge producers like Charli XCX and Grimes were a gateway, and by 2019, Magdalena Bay self-released their debut collection, mini mix vol. 1, followed soon after by a slew of one-off singles, all of which arrived accompanied by tricked-out videos. “Those early references have gotten more and more dissolved as we’ve come into our own sound,” Tenenbaum says. “Our philosophy was just to throw things at the wall. I like to think that our music lives between genres.”

Words like “anxiety” and “paranoia” come up regularly when Magdalena Bay describe their debut, but the production is beyond confident. Tracks flit between genre trappings with the ease of a band who reject the need to present any one way.

On Mercurial World, Magdalena Bay offer the listener a prismatic experience, one that is built on a desire to simply believe in something beyond the finitude of our lives. Approaching reality as a construct allows Magdalena Bay to enact their own, one that is committed to nothing but expanding the possible.

“As bass-heavy as Charli XCX and as melodically minded as Carly Rae Jepsen, these songs are not unlike the hyperactive computer pop popularized by PC Music. What sets Magdalena Bay apart is the gentleness of their lyrics and spacious, mood-building production.” — Pitchfork

“In addition to regularly dropping pop gems, Magdalena Bay have also established themselves as one of the music world’s smartest voices online.” — The FADER